This is the fifth in a series of posts from hand-picked guest bloggers about trust. The idea was kicked off by me rewatching Game of Thrones and thinking about its twin themes of power and trust.

My fifth guest blogger is Susan Cooper, who comes from the corporate world and who I first met on Triberr. When her job was eliminated, she found herself at odds with what to do next. Susan is now very happy being an artist, writer and blogger. Besides the fact that she tells really good stories, her biggest draw to her blog www.findingourwaynow.com would be her delightful illustrations.

When we hear the words trust me it can conjure up some very interesting thoughts and images. Some of these are more positive than others. I think of the people who have trust in me to do the right thing; of my cat that unconditionally trusts that I will care and protect him. I think of my family who looks to me to be there when I am the most needed.

There are times these words trust me will raise the hair on the back of our neck. Is it instinct or common sense? I believe it is a little of both.

So here is my story. 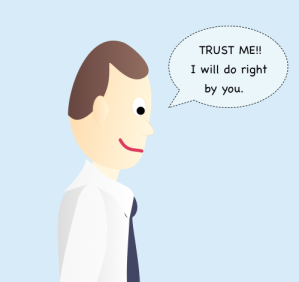 I have a burglar alarm on my house. I had been working with a particular company since we moved into our current home. Everything was going well enough until I started adding additional services. These added services were nothing major, just fire and other odds and ends. That was when I started getting an additional bill. When I inquired about the second bill, I was told the additional bill had to do with the added services. I called my sales rep to inquire if this were the case. He said that it was and to “trust him; that he would always do right by me”.

Time went by. In an effort to reduce our household expenses, I felt it necessary to downgrade my current home security service. I had been contacted by a competitor and was given a great deal that was nearly a quarter of the cost for the same service I was currently receiving. HOT DAMN, how awesome! It also occurred to me that maybe my current company had been taking advantage of me.

I called to cancel my old company’s service in place of the new one with the lower rates. I was told that I didn’t own the equipment and that they would have to check on my agreement. I had the agreement in hand and it clearly stated I not only owned the equipment but the service could be cancelled at anytime. The customer service rep I was speaking with communicated that she would call right back with an answer. The return call never came. I then called the sales rep. He listened and then asked if it would help if they matched the rates. Now I was mad. If they could have done that before, why hadn’t they?

After much back and forth, the current company offered to reduce my rate to below what their competitor had offered. I agreed, signed a new agreement and I was happy with the outcome. It seemed easier to keep the old company and not hassle with a changeover to a new one. After all, I had achieved a reduction of my bill… right?

A week went by and I received two bills as if nothing had changed. I called. I was told to ignore the bills I had received, that the system had not changed the billing to the new agreement. The very next day I received my new bill with a new account number. I paid that bill as instructed.

After another week had gone by, I received a call from the company inquiring why I had not paid my old account, and that I was delinquent. I again called my sales rep who then responded with “Trust me; I will fix this”.

Another week passed. I received yet another (nastier call) about my delinquent accounts, demanding immediate payment. When I explained the situation to the person on the phone she informed me that the system showed that I had added an additional service and that I now had three accounts NOT one. I commented: “I have one house and one alarm system… how could that possibly warrant three accounts?”

I was livid. I called my sales rep who evoked the phrase trust me yet again! Seriously! I’m sure you can figure out how I responded.

In fear of losing my measly account, he PROMISED to get the “higher-ups” involved to fix the problem. I was struck. They had the “power” and I had the problem. I had to unwind this mess before I could do anything else. I can’t tell you how many calls and emails it took to get a resolution. It was much more than anyone should ever have to do in a situation like this.

A short time later I was informed that all had been straightened out and I would to receive a refund for overpayments (DUH!). I did receive the check as promised.

I’m holding my breath to see if the accounts are now fixed and I only have the one. When I’m sure that this is the case, trust me, I am canceling their service agreement and going with the other company. 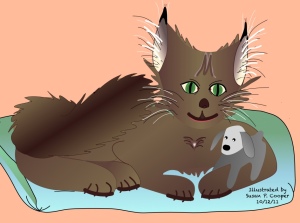 The word trust is a powerful word. When you know you can truly trust that an individual will deliver on what they promise, it is a wonderful thing. When that doesn’t happen, depending on the circumstances, it can be heart-breaking, disappointing or infuriating. In the end, all we can do is to be someone we can all trust. At least that is my goal. To be seen as trustworthy is so very important to ourselves, and all who depend on us.

Have you ever had a situation where you’ve heard the words trust me and you have gotten the feeling that all was not to be trusted? I would love to hear your story.

0 thoughts on “Trust me”

You can buy me a cuppa as a thank you!